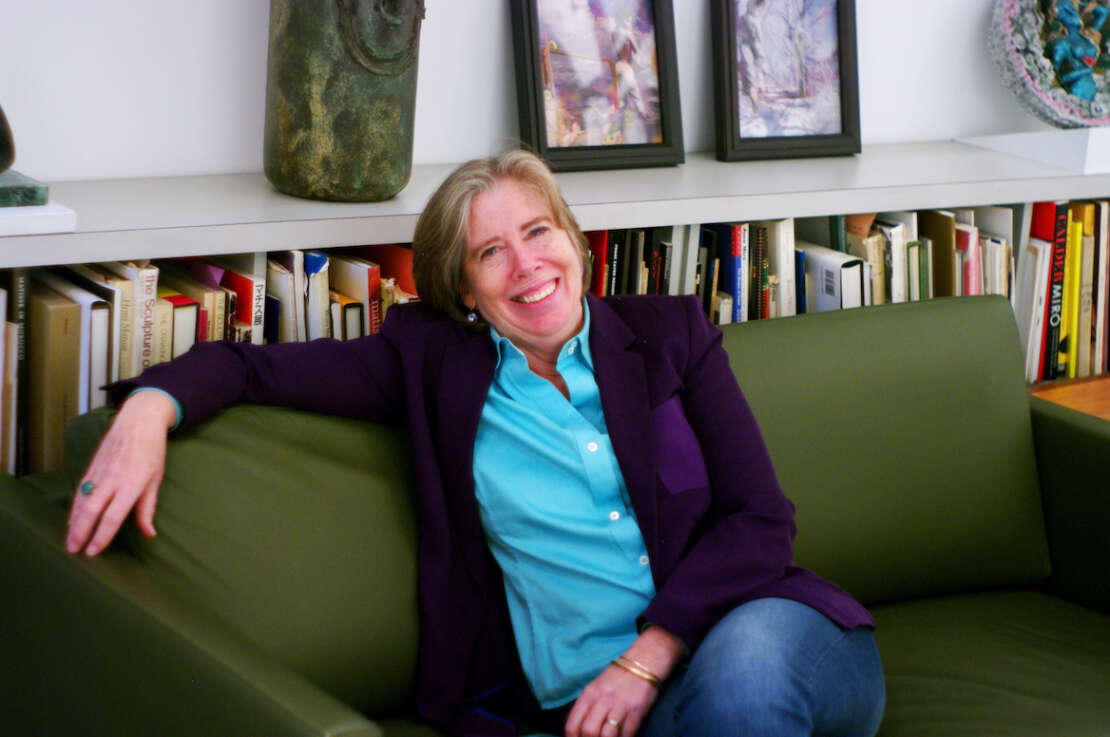 Patsy Tompkins came to New York in 1972 after working as a do-everything assistant for a fisherman in Wyoming. Patsy wanted to work in an art gallery, but found that most gallery owners were hesitant to hire someone they didn’t already know. A friend told Patsy that James Goodman was looking for someone to do gallery work, but also to help his son with homework, make coffee and run errands. Patsy didn’t have art-gallery experience or a resume, but she also lacked pretense - the scut work didn’t bother her. Goodman hired her on the spot. Patsy, now the gallery’s director, oversees four employees, and in December celebrated her 45th anniversary at the James Goodman Gallery.

Q: What does a typical day look like for you, and what’s your favorite part of the job?

We’re a small gallery with a small staff, and my primary job is to make sure everything is running smoothly and everyone is doing their jobs. On top of that, I handle all the finances and the bookkeeping and accounting. Basically, I solve the problems that come up. And I love that, that’s probably my favorite part.

You know, someone will have a problem sending something somewhere, or some client is being difficult or can’t figure something out to make a sale work. I love tackling problems. This business is full of grumpy people and crazy people, but honestly, I do love people and I like working with people. When someone is very difficult, I love smoothing them out and helping them. It’s very rewarding when it works.

Q: What are some tricks of the trade that make your job easier?

I keep copious notes on how things have happened. If you had a problem, keeping a record about what you did is helpful so you know what to do if it comes up again. Honestly, most of my tricks come from experience since I probably have more than almost any other gallery employee. Other galleries don’t have people who last as long as I have. They move on, they move up, they move over, they get their own galleries. I never wanted the headache of my own gallery.

Q: How long have you been using ArtBase, and how does it help?

I’ve been using ArtBase since they started it. I was not the first user because I told Jeremy he was going to have to test it first with somebody else, but I was probably the second user. Because I work so closely with Jeremy and Tanya, they were able to put things in it that I wanted. We sort of worked on it together.

It’s such a great system. I think all the galleries benefit from a gallery system, and I’m partial to ArtBase. I had a PC one back when it was DOS and that company was so awful - they locked me out of my system Jan. 1. I came to work and said, ‘What happened?’ And they said, ‘Oh, yes, that’s in case you hadn’t paid your bill.’ And I said, ‘But I did pay the bill,’ and they said, ‘Oh, OK, here’s the password.’ And Jeremy’s whole thing was, it’s not his data, it’s ours. That’s one of the things he knew I was big on.

ArtBase has grown and has made life so much simpler. One example is the photography bills we saved by having our images in ArtBase. I used to spend over $1,200 a month on transparency bills, not to mention FedEx and messengers. Now, if someone walks in and says, ‘Can you send me that?’, they’ll have it before they’re out the door. All the information is there and it’s very simple and easy, it’s wonderful. They have made it the supreme gallery program, because they listen to what galleries want.

Q: What’s changed the most over the years?

Q: What made you want to work in the art world?

I still considered myself a painter when I started working here, and honestly I think being surrounded by so much really fabulous art was daunting. It was also a matter of energy - the job took so much of my energy. It was really hard for me. As I grew into the job I was given more and more responsibility over the years. I always felt I was really, really busy, which is fabulous.

Q: How has the art world changed since you started, particularly in terms of opportunities for women?

I honestly feel there’re more opportunities for women. There have always been strong women dealers, like Peggy Guggenheim, Edith Halpert, Betty Parsons, Paula Cooper. So there have always been strong women, but I do remember putting up a fight with the Art Dealers Association that they needed to have a woman as president. This was in the 1990s. It had been sort of an old boys’ club, and it had all these very competent, very wonderful men. But there was a point where Jim said, ‘You’ve got to have a woman.’ We told them there were all these great women art dealers, and that finally broke them down. They’ve had a number of women running it since then.

In the art world, I think women have almost equal opportunities to men, if not more so.

Q: Do you have an all-time favorite artist or piece of art?

I’ve seen so much of the lesser-known works by the most famous artists. I’ve seen Picassos nobody’s seen, that kind of thing, Picasso would have to be, in my eyes, the most amazing whole body of work, but I’ve got a ton of other favorites. Georgia O’Keeffe was always a favorite of mine, as was Van Gogh. I’ve grown to love other artists that I probably never would have been exposed to if not for this job, like Charles Burchfield, who is sort of the American Van Gogh – he painted wind and sunlight as opposed to painting landscapes. Over the years I’ve gotten very fussy about what I like. We’ll have a Picasso come in, and I’ll go, ‘Meh, I don’t want that one.’

Q: Do you have a large private collection?

I do, because I’ve had access to so much artwork in my career. I think you’re either a collector or not. I’m still collecting young artists right now.

I have an apartment here and a house in New Hampshire, and there’s no wall space left. I just bought a work of art two weeks ago, and it’s like, ‘OK, what am I moving around to fit this?’ I was thinking I should stop collecting because I have enough, but I don’t think that’s the point of collecting. The point of collecting is to be totally excited by something when you see it.