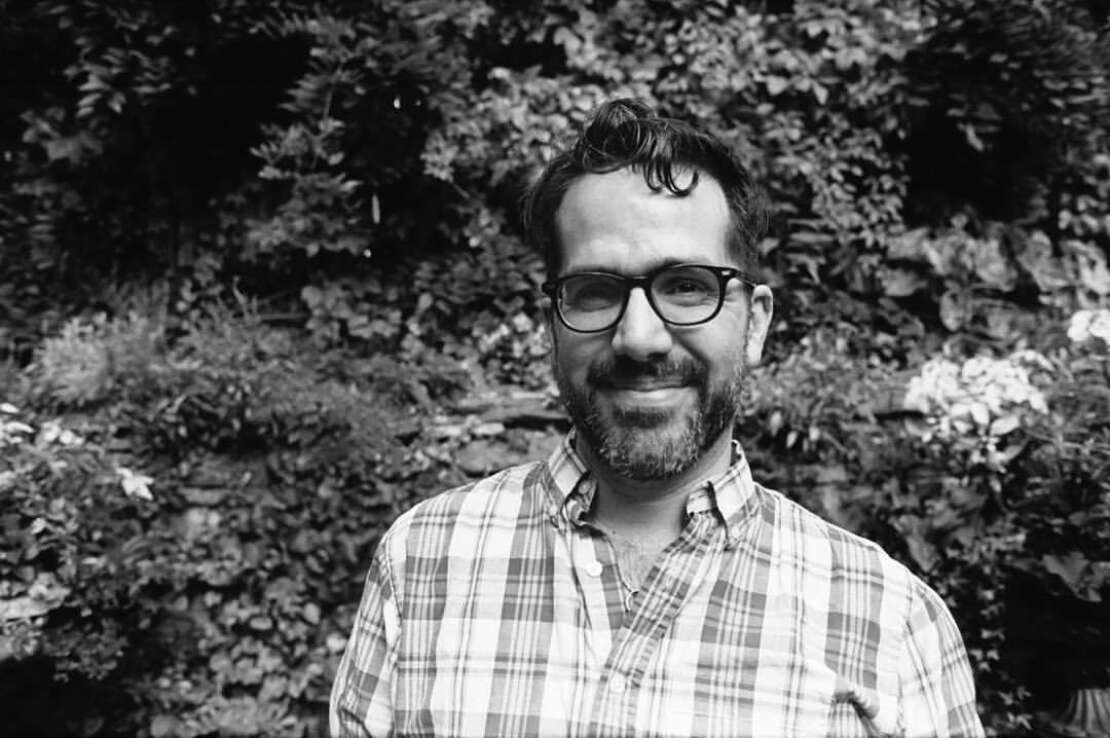 Call up the ArtBase office and the first thing you’ll hear is Adam Mathias’ voice stating the company name. It’s been that way for at least a decade, though Adam has been with the company since 2002. Back then, he answered phones, helped clients learn the software onsite, managed the company’s databases and worked side by side with Jeremy on new versions of ArtBase, before taking sole control of the design process for ArtBase 8. Today he works mostly behind the scenes, building and managing databases and shepherding ArtBase through upgrades and design changes.

Outside of work, Adam spends his time writing lyrics and scripts for musicals, a process he says isn’t as disparate from database work as it may seem.

Q: How did you end up at ArtBase?

I had been working as a database specialist at a magazine publisher that went out of business, as so many did, in 2001. During that time I ran into a friend of mine at a coffee shop. She was asking me how the job search was going, and mentioned that her sister worked for a company that might be looking for a database developer. I said, ‘That’s great, I’d love to meet her,’ and she said, ‘Well, actually, she’s right here.’ Her sister was ArtBase’s first employee. The next week she brought me in to meet Jeremy and Tanya, and that was the beginning. I really started just answering the phones. I kind of got thrown in the deep end and learned by doing.

Q: Did you know anything about art when you started?

I took art classes in college and I knew about the classics, but I didn’t know about how art was sold, at all. I have a background in theater, and the art world is very different.

Q: How did you end up working in database development coming from a theater background?

I’m a book writer and a lyricist for musicals, and I have two fine arts degrees in playwriting and musical theater writing. I got out of grad school and a friend of mine was working at a magazine publisher, which needed someone for a summer position. It was like an internship doing data entry, where I was scraping addresses off the internet for potential ad sales. By the end of the summer, I knew more about how their database worked than anyone there, so they hired me to upgrade their databases.

I liked working with the database. When they hired me, they bought a very fancy, very expensive database solution and they sent me to Vancouver for training on how it worked. Then I started customizing it and changing it for them.

Q: How did you know how to do that?

That’s a good question. Databases make sense to me. When I was in elementary school, once a week, I would get on a bus and they would drive me 30 minutes to a different school for the special and gifted children, and one of the things I remember learning there was flowcharting. That’s really the basis of what this kind of software is built on, just understanding that concept and understanding how sheets of data relate to each other.

Q: When you started here in 2002, what was ArtBase in terms of the database?

We were in version 5. It was already pretty robust compared to what you would be able to get anywhere else. That was 2002, and a lot has changed. Now we’re on ArtBase 11, and it’s running on FileMaker 16. That earlier version of the program was designed completely by Jeremy with Tanya, but it was his vision, and so for the first several years I worked here, it was really just maintaining that look and that method of operation. The database concepts that we have now are still rooted in what Jeremy’s concept was – it all comes down to the inventory and the contacts and all the different ways those two main concepts relate. ArtBase is all about being intuitive, but also giving you the information you need, so if you want to do something, it walks you through. That’s part of the ArtBase way – the software must be entirely user-centered and user-friendly while having as many options as possible.

Q: After those first years of maintaining things, did they tell you to start making changes on your own?

ArtBase is constantly evolving and everyone here has interactions with the client. Especially onsite, we would learn or we’d see them doing extra work, and we’d say, ‘I bet we can save them time by having ArtBase do that for them.’

Q: Is it unique in the industry to listen to the client in that way?

We get a lot of feedback from our clients that they really appreciate our personal interactions. When we first started, I was doing on-site visits for every little thing. Now we do that for the big projects and for certain little things, but most of our interaction is via the phone and screen-sharing. Back then, everything for our New York clients was in person. I spent half the week in Chelsea and another day on the Upper East Side. I was doing a lot of traveling around and being in the galleries and seeing them work, and I was always thinking, ‘How can we make this easier, smoother, more consistent?’ And that’s a big thing that databases provide – we can make sure all the data is being entered in the same way, so later, when you go to find some information, it’s consistent.

Q: How do you get that type of feedback now that you don’t do as many on-site visits?

We talk a lot to our clients. And we have established relationships with many of our clients. A lot of our clients have known us for 10, 15, even 20 years, so they know if they need something, they can ask us. And when we have an idea, we go to them as well. Now we’re a slightly bigger company, so I’m doing the development of the new products and when I have an idea I’ll check with the support team and be like, ‘Hey, do you think our clients will find this useful?’ And they’ll ask. There is a constant back and forth.

Q: What’s a recent feature or update that followed that path?

One of the things we kept getting people asking was, ‘Can we drag and drop images in, rather than clicking and selecting?’ For years, this was not something that was easy to accomplish. It was something people had gotten used to, though, with Gmail. When we were developing ArtBase 11 we realized there was a new technology that allows us to offer this to our clients, so we built it in knowing it was going to be a big feature.

Q: How do you stay on top of the new available features and technologies?

One of the advantages of being built on FileMaker is that they come out with a new version every year, with new tools that we can evaluate to decide if they’ll provide a benefit to our clients. Also, I interact with software every day. I use the websites we all use, and I’ll think, ‘How can I use these technologies and these concepts to be successful in ArtBase?’ That part of my brain never really turns off.

Q: How has the art world changed since you started?

Fifteen years ago the secondary market and the primary market were very far apart, and now they’re so close together, and a lot of galleries do both. The biggest change is back then the internet was still relatively new to people. When galleries would offer a work, they would send out physical photographs. We called them visuals. We had printable labels for every conceivable slide and transparency. People were like, ‘We would never put our work on a website, we would never email an image.’ And then very quickly, all of a sudden, offers were made via email. We still have the ability in ArtBase to track visuals, but it is on a tertiary screen that you have to click twice to get to, because no one uses it. That was the biggest change, going from this complete repudiation of email and the internet to now, where everything is emailed.

Q: In addition to your database work, you’re also the voice of ArtBase.

When you call, the first thing you hear is me saying, ‘ArtBase.’ That recording is probably five years old now, but I’ve been that voice for at least 10 years.

Q: Do you ever get ‘recognized?’

When I go onsite to do training I have had people say, ‘Oh wait, you’re the guy who says ArtBase!’ And I’m like, ‘Yep, that’s me.’

There was one night I was at home in my neighborhood in Ft. Greene, Brooklyn, at the local pub having dinner. It was crowded and I was wiggling through the bar and someone jumped out and said, ‘ArtBase!’

I was so stunned I just kept on walking.

Q: Are you still involved in theater?

When I’m not here, that’s how I spend most of my time. I also am a member of the steering committee of the BMI Lehman Engel Musical Theatre Workshop, a training program and writers’ workshop for musical theater writers. I help organize it and I do some teaching as well. Creatively, I write the parts of the musical that aren’t the music. I write the book, which is the play, and I write the lyrics.

I had a show off Broadway in 2010 called “See Rock City & Other Destinations.” We were nominated for six Drama Desk Awards and I won the Drama Desk Award for Outstanding Book.

My two jobs are different and I like that, but I think I bring similar skills to both. A lot of writing musicals is puzzle-solving – you have this much time to tell a story, you have this amount of music to fill with words. Both jobs are very collaborative, and I think my ability to creatively problem-solve helps me in each of them.

Q: Since you started working at ArtBase, have you learned about art or come to appreciate it in a new way?

I always loved art. Before I had this job, I had gone to a lot of museums and I had always thought of art as priceless. Like I’d go see these famous works and that was just my perception – they were priceless, kind of untouchable. Then working here, the first time I went onsite to a gallery, they were having a Picasso exhibit. I was looking at something that my brain processed as a priceless work of art – and then next to it was a price tag. So that’s what I’ve really learned. In theater we call it learning how the sausage is made. Like, oh, this is a business.

Q: Do you have a favorite artist?

Q: Is this a question?

Richard Avedon. His foundation is one of our clients, and I spent about a week there at the studios when he was still alive. I got to meet him and interact with him, and he made a big impression on me.

Through this job I’ve also met William Wegman and his dogs. On my fifth anniversary here, Tanya and Jeremy gave me a framed Wegman, and that has become sort of a tradition now. So when you turn five at ArtBase, you get a Wegman.

Q: Do you have a favorite musical?

It’s hard to answer that because there are so many, but I do love “Sunday in the Park with George,” the Sondheim musical about Georges Seurat. So that’s an overlap, which seems appropriate.